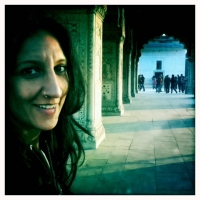 Sarita Khurana is a director, producer, and writer whose work focuses on South Asian stories, and female subjectivities.

Her most recent short film, Home, Delivered (2020) was commissioned by the Asian American Documentary Network as part of their Covid-19 storytelling series.

Khurana’s short film What Remains (2013), a collaboration with visual artist Chitra Ganesh, screened at festivals internationally and was featured in exhibitions at the Brooklyn Museum of Art and the Göteborgs Konsthall in Sweden. Khurana’s documentary Bangla East Side (2004), about Muslim youth in New York City just after 9-11, was awarded a NY Times production grant, and is distributed by Third World Newsreel. Khurana also produced Personality (2008), a feature documentary about aspiring background dancers trying to “make it” in the highly competitive Bollywood film industry.

Khurana holds a B.A. from Oberlin College, an Education Masters from Harvard University, and an M.F.A in Film Directing from Columbia University’s School of the Arts. In 2009, she was named as one of NY Women in Film & Television’s notable “Emerging Female Directors.” Her films have been supported by the Tribeca Film Institute, the International Documentary Association, NALIP-ARC Diverse Women in Film, Art in General, the National Film Development Corp of India, Women in Film-LA, New York Foundation for the Arts, the Asian Women's Giving Circle in NYC, the Center for Asian American Media, A-Doc, and Film Independent.

In 2008, Khurana co-founded Cine Qua Non Lab, an international development lab for feature films, based in Mexico and the U.S. Recent projects include And Breathe Normally, winner of the Sundance 2018 World Cinema Dramatic competition; Museo, winner of the 2018 Silver Bear Screenplay award at the Berlin FF; and La Jaula de Oro winner of the 2013 Un Certain Regard prize at Cannes.

Sarita is currently a year-long fellow with the Center for Asian American Media, where is she working with mentor, Ramona Diaz, on developing her next feature film, The Last Resort. The Last Resort explores aging in America, the lives of immigrant seniors, and creating new notions of home and community.